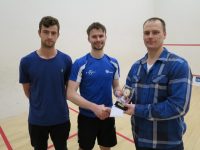 Scotland’s Kevin Moran produced a masterful display of squash to clinch the Chia4uk.com Gosforth Classic at Northern on December 18. Moran and Lancashire’s Julian Tomlinson treated the bumper Northern crowd to an early Christmas present with surely one of the finest professional finals ever staged in the region, in this PSA Satellite $1000 event. Fleet of foot and deft of hand, the unseeded Moran turned on the style to reproduce the form which has taken him to the verge of the world’s top 100 in recent years. Moran was fresh from clinching the Boston Open the week before, and the 26-year-old’s incredible court speed and imaginative hitting carved out a hard-fought 2-0 lead over second seed Tomlinson. But the world no 253 – finalist in the same event last year – was never far behind and he forced the pace early in the third game to establish a good lead, then hung on for an 11-9 win to narrow the gap to just one game. 23-year-old Tomlinson is making quite a name for himself as a real fighter on court, and he battled every step of the way, showing superb court coverage, lung-busting stamina and great consistency. Moran, though, just had the edge in terms of flair and deception. His low wristy backhand cross-court winner left Tomlinson wrong-footed on a few occasions – and that is no mean feat. Keeping his focus despite a late onset of cramp, the Scotsman closed out the match in quite a flourish – a devastating volley nick to clinch a 3-1 triumph and the $400 top prize.

With precious PSA world ranking points up for grabs, not to mention cash prizes for every match won in the main event, the Gosforth Classic attracted a bumper entry of promising young professionals from all over the UK – and the cream of the North East crop too. Northern trio Cai Younger (world ranked 380), Liam Gutcher and Michael Mattimore all reached the second round, along with Chris Wiggins of Northumberland Club and Newbiggin No 1 Paul Lord. Gutcher was edged out 3-1 by Tomlinson, with Mattimore and Wiggins losing respectively to Seigo Masuda and Surrey’s Phil Nightingale in the second round. Meanwhile Lord found Chris Leiper of Edinburgh in unstoppable form. Tournament organiser Younger won his second stage tie 3-1 against Yorkshire’s Elliott Ridge, to reach the quarter-finals. But his, and the North East’s, interest ended there as he lost 3-0 to Nightingale, who won this event in 2014 and has a highest world ranking of 141. Nightingale was favourite in the semi but could not stop the whirlwind Tomlinson, who hit top form for a 3-1win, whilst Moran saw off a strong challenge from England Under 19 international Harry Falconer from Grimsby.

In the A event plate, Tynemouth’s ex-pro Jon Evans found a full array of winning shots in his locker to establish a 2-0 lead – but Newcastle University’s Michael McKay found his rhythm in the third and fought back valiantly for a superb 3-2 win in a match which showed some of the best that North East squash has to offer. 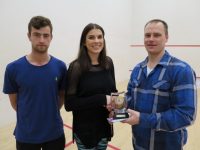 Tynemouth was again to the fore in the B event where Samantha Ward lived up to her billing by reaching the final as No 2 seed. Ward has been in fine form of late, and she sneaked a high-pace final against Eldon Square’s ever-improving Milo McKenzie 3-0. With McKenzie picking up some amazing balls, Ward needed all her experience to produce some inch-perfect winners, coming back from 10-7 down to clinch the match 12-10 in the third.

It was a real shootout in the B event plate final, where Northern’s Josh Askew stayed patient and showed just a touch more accuracy to see off a strong challenge from Kent hard-hitter Adam Ward. And I promised not to mention the shot he played against his own left foot. 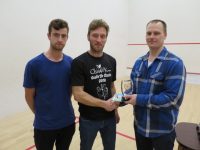 The C Event final was a real clash of styles, with Newbiggin’s Chris Pringle up against Conor Lawless of Eldon Square. With a moniker more suited to MMA fighting than squash, the bearded Lawless has a fearsome overhead serve which had served him well in the early rounds – while his soft volley drops and reverse angles often leave challengers in a chokehold. No wonder he is on North East squash’s wanted list. Pringle though, hits the ball as he runs – hard, straight and true. He left Lawless feeling sour (cream and onion) with an energetic display, battling his way to a 3-0 final win.

Northern’s Dave North is a man who likes to get his money’s worth – even when he’s not paying for the court. So he was doubly pleased after a mammoth 3-2 win over young clubmate Kieron Mahoney in the C Event plate final.

North was 2-1 down but kept his head in the closing stages to see out a deserved victory – one of only two Northern players to lift silverware on home turf over the weekend.

Thanks go out to tournament organisers Cai Younger, Michael Mattimore and Chris Wiggins, who all worked extremely hard to bring some top-class festive tournament squash to Tyneside.

And special thanks go to tournaments sponsors Baste and Bray, DGR Double Glazing, Northumbria Squash, Sabre, Reckit, Axis Gym, Northern Squash Club for use of the courts, and in particular to main sponsors Chia4uk.com – the Northumberland-based health food and supplement specialists.