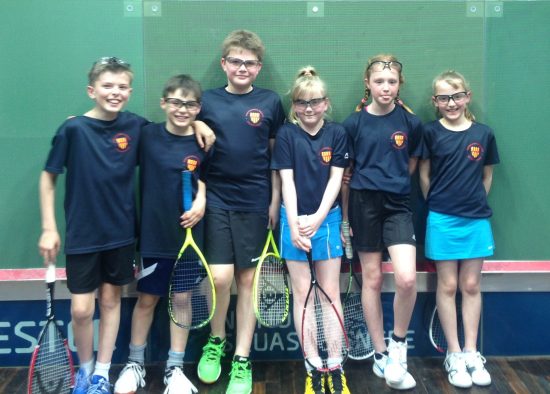 The Under 11 Festival returned to Manchester this April as more than 100 children competed for the prestigious girls and boys team title. The one-day festival was staged on 8th April at the National Squash Centre, home of the National Squash Championships. Six of the regions brightest young talents took to the road representing Northumbria in an exciting full-on Festival of Squash. Representing the Boys we had Callum Wilkie (Alnwick), Sam Ponente (Northern) and Angus Dean (Jesmond). For the Girls we had Zoe Shipsey (Northern), Grace Moore (Northern) and Holly Burdon (Northern).

Early start for the boys with a 9am kickoff against Hampshire, nerves showed with all the players up against a strong team, only Angus managed to get a game resulting in a 3-0 team loss. Undeterred the boys composed themselves as they took on the mighty Surrey, Callum lost 2-0 but gave a great fight, you could see the nerves had started to settle and the lads were a little bit more relaxed in their games but unfortunately it wasn’t enough to gather any points with another 3-0 defeat. The quality of the teams that the boys were up against really showed with both Hampshire and Surrey going on to finish in the top 7 of the overall tournament. 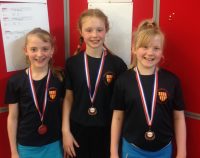 Lunch over, loads of 3 quarter games on the show court and a few rounds of tag to get the proceedings underway. The boys supported the girls in their first game against Wiltshire, Holly cruised through to win the first match and setting the benchmark for the girls, Zoe put in a massive effort in what turned out to be a great match for all the spectators just losing out with only a couple of points in it. With all to play for Grace took to the court in yet another thrilling match that could of went either way, another close 2-1 loss however there were some great rallies from this youngster who looked very cool on court, great movement and always finished with a smile for her supporters, even when the result didn’t go her way, what a great attitude!!!

Back to the boys who were still up for the fight as they took on Essex 2 in their third match. Angus looked confident and strolled through to win at 3, Callum was always going to have a tough time at number 1 playing against boys ranked in the top 10, again he put up a really good fight, played some great rallies and showed he deserved this spot but couldn’t overcome their number 1 despite his best efforts. With a 1-1 score it was all down to Sam to determine the outcome, emotions and nerves got the better of him and he lost the first, with some strong words of encouragement he battled through and played the game he likes to play winning, the second. Frustration and emotion now on the other foot when his opponent started making mistakes and allowed Sam a free run to the end, not only his first win but also a great lesson learned about controlling your emotions. Final match was to determine our finishing position, playing against Suffolk and with a win behind them the boys were full of confidence going into their games, almost a mirror image to the Essex game Angus won comfortably, yet again a very strong number one beat Callum despite another very good fight by the talented young man, Sam full of confidence now he beat their number two 2-0 and even managed a few fist pumps in celebration. With the match in the bag they claimed 11th place out of 21 teams, a great result against some strong opponents.

Later than expected it was back to the girls to fight for their final place, Essex were next on the list and succumbed to the mighty Northumbria, convincingly winning 3-0. The girls gave their strongest performance of the tournament with some fantastic squash, Zoe, Grace and Holly played their hearts out to win 3-0, huddling together after every game with tips and advice for each other, what a great team performance. Without a rest the girls took this positive attitude into the final match and totally outfoxed Suffolk convincingly wining 3-0 and securing a well deserved 7th position in the competition.

Overall this was a fantastic weekend with great results, there was some exceptional talent in both groups so they need to be proud of themselves and what they have achieved. It was a pleasure to be part of it and great to see so many kids having so much fun in such a well run tournament. Look out for the names as I am sure we will be seeing a lot more from these 6.