Northumbrialand Mens over 55’s team fail to qualify for the finals by one point – 4 massive huffs and 1 ruptured Achilles followed.

Hey squash fans – Bobby Backhand here reporting on your Northumbrialand Mens over 55’s county weekend just gone! They had to play 4 matches in less than 24 hours, so like a month’s worth really – against the other 4 Northern Countries; Lancsha, Chesha, Kumbria, and Yorkshera. The heady aroma of Deep Heat, Ibuprofen gel, Strawberry Calpol, manly boasts and Brut 33 hung in the men’s changing rooms like gorillas in the mist. But these weren’t gorillas – these were monkeys with sticks.

Their team consisted of the newly crowned over 6 stones national champ Evans, ex good player Millington, Scottish journeyman Hunter, the formerly unranked Englishman Ward, and Newbiggins self-proclaimed peoples champ Freeman. Bryan Beeston, ex world No.1 for 15 years and unbeaten in the Westoe internal leagues for 7 weeks, was unavailable due to his diary having some pages missing. And I can’t believe what happened – they won 3 out of their 4 matches, lost the other one 3-2…… yet failed to qualify by one point! Unbelievable, I know squash fans. But read on…… and as the story eerily unfolds – you’ll see what bad luck these spirited time travellers had.

1st up vs Lancs – won 4-1………………… but with the hapless Hunter rending up horizontal…… and rupturing his Achilles in the 3rd game! Even though we told him to get up as he still had one good achilles to play with, he decided – no, he couldn’t play on, and wanted to go to A & E coz he’d brought a pound for the swirly hot chocolate machine they always have in hospitals. At the hop in clinic, they put one of those big ski boots on his ruptured Achilles, so he was looking good to be back for the 2nd match. The other 4 lads all won – so a good start with a 4-1 win, well, apart from poor Hunter, but to be fair, he only had to buy one boot now for his skiing trip next month. Every cloud! 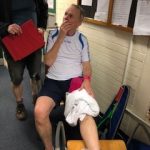 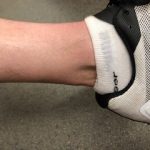 2nd match – vs Cheshire – won 3-2. With Hunter deciding he couldn’t play with his new boot on coz it just didn’t go with his blue shorts and pink top, the lads only had 4 players, and so were 1 down before they’d started. Then more bad luck! Evans, who was definitely going to win his match cos he’d already told us 12 times on the way down, – got cramp in his calf – the one on his leg! He played on but could only really run to the left. He asked to change courts to one which had no left side wall so he could sort of go right around in a circle, but they wouldn’t. So he sort of limped thru the rest of that match. Once again though, Millington, Ward and Freeman won, – so a 3-2 win. !

3rd match – vs Cumbria- won 3-2. For the Sunday matches, they drafted in Andy Smith from the 45’s team who were playing down the road but who had already lost because they weren’t good enough. And by heck Smith did well! – he won his match! What a great stand in, – they would have played him in the earlier matches if he was better. Evans and Ward both won, but Freeman and Millington’s frail old bodies let them down, as their 3rd match in less than 24 hours took its toll and they lost to clearly less talented but to be frank, more able bodied, players. But – another 3-2 win.

4th and Thank goodness, Final match – vs Yorksha- Lost 3-2. Smith had clearly peaked in a fit of enthusiasm in his 1st match and couldn’t keep it up for his next match, so on 2nd thoughts, they might not bother playing him again actually. I mean, its ok being a canny lad n that but this is the cut throat squash world. Anyway, Evans and Ward both won again, but Freeman & Millington just couldn’t drag their legs through from the 80’s and, although closer than their morning matches, couldn’t sneak any points. Lost 3-2. 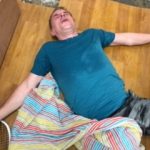 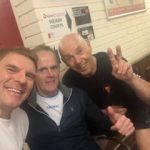 So your old boys came close but I’m afraid just didn’t do enough. But they were unlucky. To have one player rupture his Achilles and another get cramp is probably illegal in the modern game and the lads could have sued. But they didn’t – they just got on with it like the troopers they are. But also, simple things like – if there were more talented, or had brought 5 totally different players, or maybe even if they’d all tried a bit harder – might have helped. But those are all minor details in what was a monumental effort by the whole team.