Play-offs weekend 7th/8th of September at Tynemouth SRC featured Northumberland A versus Northern Squash Juniors I and Westoe B versus Primrose Thursdays.

Yet again there is going to be a new name as champions. Games were played 4-3-2-1 with PAR-15 scoring.

Northern Juniors were winners on points against Northumberland (the favourites to win) who were a man down from the start. Charlie Ponente’s consistency overcoming the slightly off kilter flair shots of Joe Harvey. Game of the day was Alex Cahill against John Thompson with Alex eventually recovering from a spate of mistakes to win against John who was very unlucky in games 3 and 4. Alex did mention about a ‘late night at the races’ but this result still gives John the MVP of the day award. Chris Wiggins overcame Matthew Thompson 3-0 to tie the match at 2-all but John’s strong showing gained more than enough points to take the juniors through to the final.

Westoe were again vying to secure a place in the finals, this time against local rivals Primrose Thursdays – so we had a derby match on our hands. Fiona McFarlane easily overcoming Barrie Daglish in 3 and likewise Tony Hockey over Phil Sheeran, this allowed Primrose at the halfway stage to look very comfortable. This left Paul ‘Rockdog’ Little needing to win against Shiv Pabary. Paul duly took the 1st game but Shiv steadied himself to take the match 3-1 and put Primrose into the finals. This left the number 1’s to fight it out for the honour of their teams. The young pretender Sam Sweeney against Ryan Hall with Ryan coming out on top for a 3-0 win.
Westoe B versus Primrose Thursdays
Barrie Daglish 0-3 Fiona McFarlane 6-15 8-15 5-15
Phil Sheeran 0-3 Tony Hockey 11-15 10-15 8-15
Paul Little 1-3 Shiv Pabary 15-12 9-15 10-15 11-15
Ryan Hall 3-0 Sam Sweeney 15-9 15-12 15-4

Congratulations to the Northern Squash Juniors I and Primrose Thursdays who battle it out tomorrow to decide the 2019 champions. 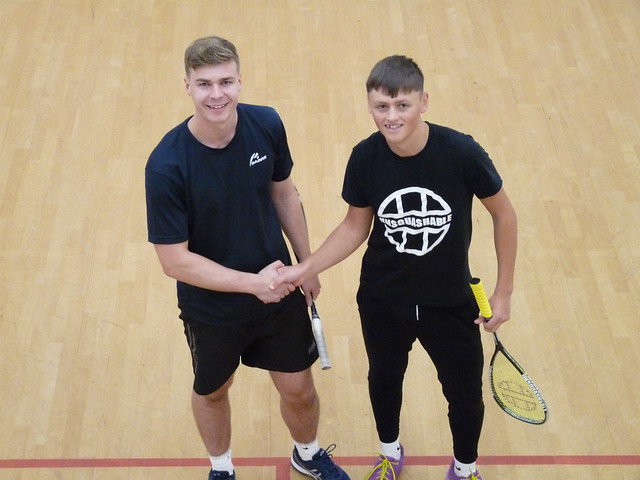