Day 2 of the play-offs at Tynemouth SRC featured Northern Squash Juniors I versus Primrose Thursdays to decide the new champions of the Northumbria Summer League 2019. Yet again the hunt for the cup is still going on so there was no cup to be presented to the winners.

There was to be no 3rd/4th play-off as both Westoe B and Northumberland A were unable to field a team.

Northern Juniors were again looking ready to take on the world after yesterdays win against Northumberland. Megan Evans after her previous day’s W/O had to actually step on court and waiting for her was Fiona MacFarlane. Megan began very confidently winning the first game with Fiona doing all of the running. Fiona then turned the tables winning the second game. Megan was still playing some very good shots but Fiona was getting lots of them back now. The third and forth games were shared meaning we had a fifth game decider. Fiona pulled away from Megan and then Megan more than halved the deficit but Fiona won the important points to take the match 3-2. Despite losing the match Megan Evans is the MVP of the day for her performance.

The second game of the day was between Charlie Ponente (the oldest junior in town) and Tony Hockey with Tony winning comfortably with many deft drop shots and touch volleys. The third game was between John Thompson (MVP from yesterday) against Shiv Pabary wearing a Barbados top to show John that he had been there on holiday. John was obviously unimpressed as he saw out the match 3-0.

This left the fourth game finally balanced with Matthew Thompson against Sam Sweeney another junior. The first game was a very tight affair with both players making mistakes and Matthew winning on a stroke. In the second game there was only one player making mistakes and that left an easy game for Matthew. Sam came out for the third game showing more composure but there was only going to be one winner with Matthew closing out the match. So by winning 3-0 Matthew had won the Cup for the Northern Squash Juniors I.

Congratulations to the Northern Squash Juniors I who are the 2019 champions on games won after drawing 2-2. 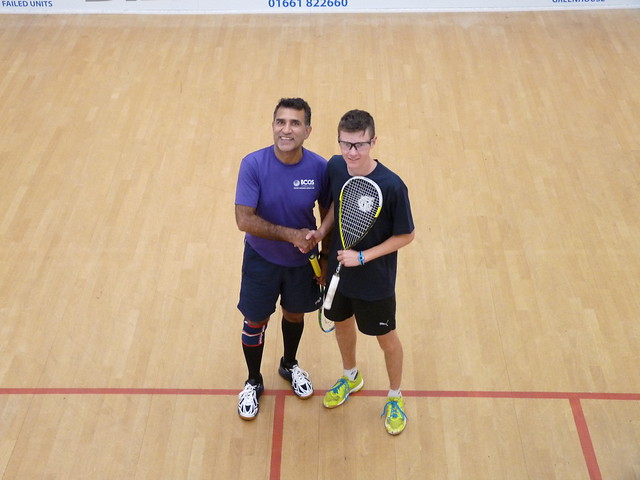