To start the finals day off was Jessica Heron-Riley against Sophie Johnson. Unfortunately with there being only the two of them in the draw they battled it out for who would become the county Champion. Despite Jess giving it her best effort, she lost out to Sophie 3-0 who was just too good. However the Boys U11 final saw Sam Tufton play some of his best squash to-date, battling past 2nd seed Leo Blackett in the semis 3-1, his first win against Leo in a competition and what a time for it to come. However, he faced the top seed Aidan Mahoney who looked in fine form going into the final. Sam before he knew it was 2-0 up. Yet it was Aidan who showed his fighting spirit, responding to take a convincing 3rd game. Although, Sam was able to utilise his counter-attacks and athleticism and got to match-point, yet once again Aidan pulled through to nick the 4th game. Picking up where he left off, Aidan steam-rolled his way through the 5th game to give himself 9 match points, yet Sam salvaged an impressive 6 match balls before Aidan managed to haul his way over the finish line and claim his first County title.

Both U13 finals had a strong favourite in the form of Shae Patterson and Sam Ponente. Rising starlet Shae, faced Northern team-mate Kate Naisbitt. Shae managed to keep her cool and claim the title 3-1. A good tussle between the two considering Kate is 18 months younger. Sam Ponente cruised his way through to his second county final, up against Tom Watts who overcame Dan Toole in the semi-final 3-1. A combination of controlled length hitting and an array of attacking variation proved too much for Tom and he claimed the title without dropping a game the whole tournament.

The GU15 final was contested between two familiar faces, Annabelle Satow and Mia Smith. A high quality final with both players evenly matched throughout. Although it was Mia’s hard-hitting basic game that posed a real threat and managed to see of a spirited Satow 3-1. The BU15 final saw heavy favourite Lewis Cruz against Ollie Forster, Lewis doing what Lewis does best, implementing a ferocious tempo with numerous hard, low drives which overpowered Ollie and led him to a 3-0 victory.

The GU17 final was a showdown between Kate Barker and Emily King. Katie was on tip-top form, marching through the 1st game not giving Emily a sniff. However the next two games, Emily was able to stamp her authority on the match a little more, upping the pace with her length hitting and bludgeoning anything loose to the back of the court.. However it was Katie’s crisp length hitting and attacking flare that forced Emily out of position and was able to pounce on the follow-up. A 3-0 victory for Katie. The boys’ U17 final was arguably the match of the day between Matthew Thompson the top seed and Tom Walsh the ¾ seed. The match was a see-saw affair, where both players had their chances throughout. Tom’s short game was firing on all cylinders and he won the first 11-9. However Matthew’s retrieving goes without saying, frustrating Tom and put him in good stead to win the next two to put him 2-1 up. The all-important 4th game was crucial, back and forth between the two where Tom had a justifiable 2 game balls. Yet in typical Thompson fashion, Matthew clawed it back to a nail-biting tiebreak, yet it was Tom who nicked the 4th game 12-10. This gave him the ascendency in the 5th and was ahead throughout to upset the seedings and claim the title.

The GU19 was a repeat of last years’ U17 final with top seed Megan Evans to play Harriet Wight. An even 1st game between the two, meant that every point was crucial but it was Harriet who managed to stay more solid and won the game. The 2nd saw Megan respond to the deficit and dominated across the middle of the court to seal the 2nd game. The 3rd saw Harriet pull out some of her best squash to clinch the 3rd game after a number of hard-fought rallies. The 4th saw another fight back from Megan who was able take the match to a decider. Harriet led 6-3 at the start of the 5th and had the potential to cause an upset yet it Megan who was able hang tough and peg the lead back to 8-8. The next few points were pivotal, Megan just able to play the bigger points better, taking her 4th county title. Finally, the Boys’ U19 final as ever is a highly anticipated match. Both players no stranger to each other. Max Forster and Andrew Shipley entertaining the crowd to some very high quality squash, Max just able to capitalise on his chances. As ever, Andrew’s incredible movement kept him in the game until the end of the 1st where Max played a backhand drop, Andrew was stuck in the back forehand corner and sprinted to the front backhand corner and stretched too far on a lunge, pulling his hamstring and having to concede the match. A commendable effort nonetheless as Andrew hobbled to receive his runners’ up trophy, we wish him a speedy recovery indeed. 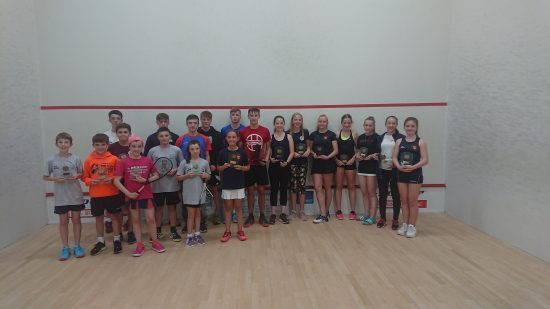