Nottingham based pro Mark Fuller claimed the PSA Northumbria Open title on Sunday 15th March, in front of an enthusiastic crowd.  Fuller faced off against local talent & number 2 seed, Max Forster. Both Finalists came through their respective semi-finals unscathed, bagging 3-0 wins; thereby setting them an equal test against one another on paper.  The youthful 18 year old Max put Fuller to the test in the first game with Fuller only just taking it 12-10. The second game was equally as competitive, and with Forster demonstrating great athleticism, he levelled the match, taking the game 11-9 and sending the cheering locals into a frenzy.  The third game was another physical test with both players going back and forth winning points, but it was Fuller’s experience that got him over the line taking it 11-6, before proceeding to take the 4th a little more comfortably, 11-2. Fuller is not short on determination nor experience, both attributes that served him well to see off the upcoming junior 3-1.

As for the PSA plate final Louis Tavares and Sam Gibbon battled it out in a lengthy five setter, putting each other to the test for the duration of the match with all the games being close encounters. Tavares took the first game 11-8 with Gibbon following close behind, levelling the match by taking the second game. Tavares capitalised for a second time in the match taking the third game 11-7, however Gibbon was still in it for the win and took the last two games 11-9 sealing him the plate title.

The ladies final went according to seedings also with number one seed Kim Hay and two seed Poppie Jaram taking on each other for the ladies title. With both finalists overcoming their semi-final matches in 3 games it was set to be an equal contest for the two. Although the match was a competitive contest Hay’s consistency and accuracy were on display for all to see and her dominance at the front of the court set her in good stead for the duration of the match. The previous British Junior Champion took the ladies title in straight sets over her Yorkshire opponent.

In the A event final number 2 seed Simon Broach (Newbiggin) defeated the unseeded Ben Sims who overcame the number 1 seed Michael Bridgewater in the second round. A series of close encounters in the previous rounds worked to the detriment of Sims unfortunately, allowing Broach to capitalise and take the win in 3.

The A plate final saw Paul Dodds defeat Mike Philips in an extremely close 3-2 encounter with the match swinging back and forwards throughout. Dodds took out Phillips 16-14 in a lengthy 5th game securing the title in his name.

The B event went to seeding as the trophy was lifted by number 1 seed Shiv Pabary after he defeated Ben Brown in an extremely close 3-0 win. With the first and third games going to 12-10, it’s safe to say the 3-0 scoreline doesn’t reflect the real closeness of this final.

The B event plate final was contested by Hexham’s Paul Satow and Tynemouth’s Colin McNestrie in a close 3-1 match. The title being taken by McNestrie 13-11 in the fourth game.

In the C event the number 2 seed Umer Chughtai took on Stan Brown the top seed for this event Whilst Chughtai went down 2-1 in the early stage of the match he soon demonstrated the determination he needed to seal the win, taking the last two games 12-10 and 11-8.

The C plate final saw Newbiggin’s Phil Dobinson take on Tahir Mahmood in a relatively steady 4 game match, with the lad from the North East coastal club eventually claiming the title with a score of 11-8 in the fourth game. 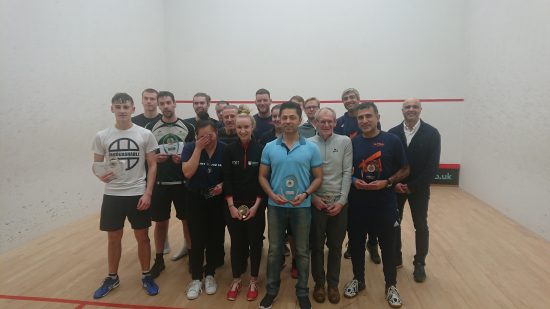 Big thanks go out to the organiser Dave Barnett and to the main sponsors John Jasper Care and InDental Group for supporting the event and providing great momentum behind the success of
the tournament over the weekend.